Are you looking for the next top online betting tips for the biggest UK horse racing meetings and where to place your wagers? Then take a listen to Bet UK's Fallon's Fancies Podcast.

Bet UK has teamed up with famous champion jockey Kieren Fallon to provide our players with the ultimate horse racing podcast. Featuring top betting tips from the six-time champion jockey, including his head, hunch, and heart selections for all the biggest UK horse racing meetings. Not only that, the podcast will feature specialised knowledge and insight into all the top horse racing events in the calendar.

Who is Kieren Fallon?

When looking for expert horse racing tips, you won't find many people more qualified than Kieren Fallon to provide them. Having recorded his first classic win in 1997 while riding Sleepytime as a stable jockey for Sir Henry Cecil, Fallon would cement his first champion jockey status later that year, with an impressive 202 wins throughout the season.

This trend would continue for five of the next six seasons, with Kieren only missing out on the Champion Jockey title in 2000 due to a serious arm injury from a fall at Royal Ascot. By the time he retired, Fallon boasted multiple wins around the world, including in the UK, Ireland, France, Germany, Australia, and the United States. 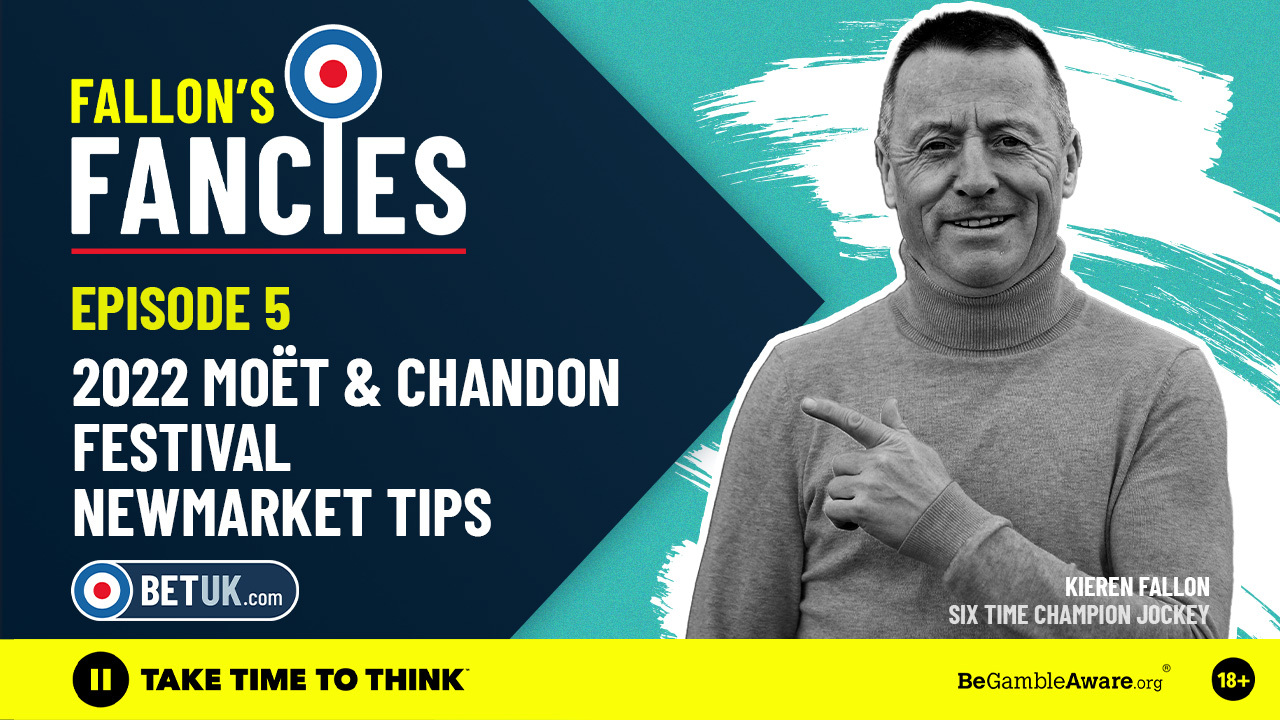 Mysterious Night is a young horse with a fair bit of expectations behind him. Charlie Appleby’s horse has shown promise early on in his career finishing second by a nose in his first race and comfortably winning at Newbury last time out. At 27/5 this is the highest odds the horse has ridden at but Kieren Fallon believes that the price is worth looking at.

Back Mysterious Night at 27/5

Persian Force looked like it was going to become a real force in the Horse Racing world early on in it’s career. However, a second place finish at Ascot in June is the reason his price is over evens here. It is worth noting that on that occasion, the large field worked against Persian Force and for that reason, he didn’t quite reach the heights expected. With a smaller field here, it should work in his favour.

Kieren Fallon’s hunch on Monday afternoon was Clearpoint, the horse who was unbeaten in two races at Newcastle and Ayr in some competitive races. Unfortunately, owner Sheikh Rashid Dalmook Al Maktoum and his team have decided against racing Clearpoint at Newmarket.

John Gosden looks set to bring Frankie Dettori back to his team to ride Inspiral in the 15:35 Falmouth Stakes. With that in mind, it is clear to see why Kieren Fallon’s head fancies the horse to win. Dettori has an excellent record on Inspiral winning all four races the pair have combined on. There was a large break between it’s last two races which some believed would hinder the horse; however, a dominant performance in the Coronation Stakes at Ascot demonstrates just how strong this horse is.

Aiden O’Brien has a number of young horses that have the potential to be the next big thing. One horse who has seen it’s hype drop slightly is Tenebrism. After a fantastic 2021, the Horse was taken up to the 1m but has struggled at that distance weakening late on in both races. However, if Tenebrism can adapt to the longer distance, there isn’t any reason why it couldn’t get it’s first victory of the year.

One of the most experienced horses in the race is Alcohol Free, with 13 races to its name and five victories, it isn’t a horse that stands out to the average punter. However, the horse has taken a step down from it’s recent standard and is ranked among the best horses in the race. That being said, Inspiral and Tenebrism are fantastic horses that will rise through the ranks at a quick pace, if any horse looks likely to cause an upset, it’s Alcohol Free.

Despite not being a favourite for this race, Kieren Fallon’s head is saying that the experienced horse Jumby has a great opportunity to win this race. He’s raced at Newmarket seven times, which is more than some horses have ridden in total and bare in mind that in those seven races, the horse has been in the top three five times.

One for the each way fans, Vafortino is one to watch, the horse has been quite inconsistent in racing recently. It has only won 3 races in total but has finished in the top three seven times making this horse a fantastic choice for your each way bets.

The phrase: “Always the bridesmaid and never the bride” is a phrase that seems to suit John Gosden’s Find. He almost always finds a way to be in the top three, even at odds of 40/1 but very rarely manages to win the race. However, another each-way bet could go very well when it comes to the Bunbury Cup.

Charlie Appleby’s Creative Force is a horse with a very good pedigree. After finishing in the top two in 8/12 races. The horse tends to struggle in bigger fields; however, we’re expecting the field to decrease in the next few days which should be fantastic news for Creative Force.

Back Creative Force at 9/2

Perfect Power is at this level what many may consider the ‘perfect’ horse. It might have struggled to match the likes of Coroebus at Newmarket but in this field Perfect Power should be one of the top contenders in this race.

Back Perfect Power at 7/4

Artorius is a horse who has struggled to gain victories in his career but what you have to consider is that the Sam Freedman horse has consistently raced at a good level, finishing in the top three on eight occasions. Perhaps an underdog in this race once again but as an each way bet Artorius could be an excellent shout.