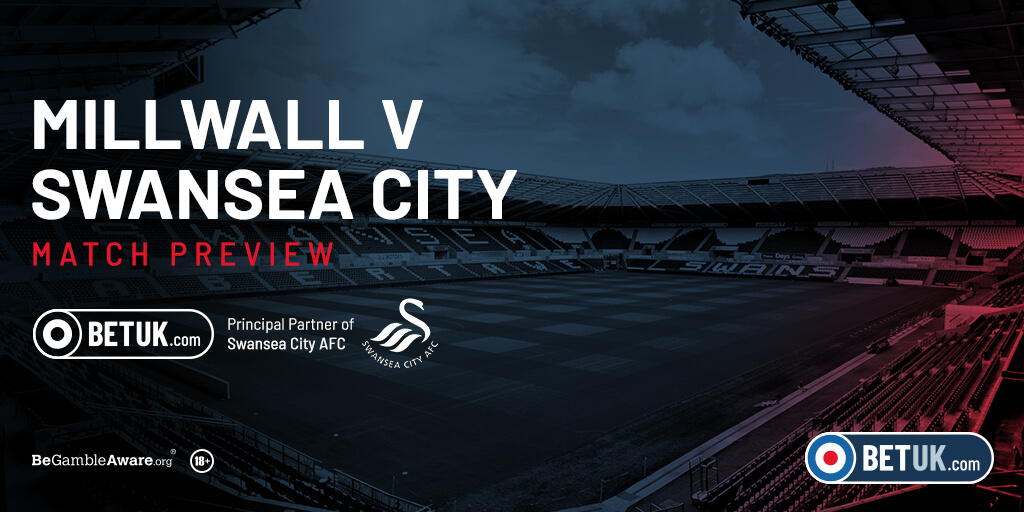 Swansea visit Millwall for a 5:30 kick off at the Den on the 1st September. Both sides come into the game after losing their last Championship game. Both teams were also in Carabao Cup action during the week, so there could be some tired legs on the pitch. You can bet on all Millwall v Swansea markets with Bet UK’s new online sportsbook.

Last Time Out In The Championship

Millwall have struggled to find the form that nearly took them to the playoffs last season. Neil Harris’ side lost their last game 1-0, away at newly promoted Rotherham. An early Sean Raggett goal secured the victory against a Millwall side that should have equalised in the second half. The Lions dominated the second half, with Tom Elliot and Jack Cooper both going close. New signing Tom Bradshaw was introduced in the second half, but could only place his header over the bar. Harris was understandably angry after Millwall lost for the

Tom Bradshaw will be looking to get off to a goalscoring start at the Den on Saturday. Bet UK’s online sportsbook is offering odds of 11/2* for Bradshaw to be the first goalscorer.

Last Time Out In The Championship

Swansea lost for the first time this season against Bristol City. Andi Weimann scored within a minute with the only goal of the game as he continued his fine goalscoring form. Swansea’s first half display showed signs that the team was still suffering from their 2-2 draw with Leeds. At half time, Graham Potter replaced Tom Carroll and Joel Asoro with Jefferson Montero and Matt Grimes. The 2 immediately introduced more energy and Swansea looked more dangerous. Mike van der Hoorn had a header cleared off the line, and Fulton and Celina both went close. It turned out not to be Swansea’s day, but positives can be drawn from the second half.

Mike van der Hoorn went close last weekend, but can he go one better this time around? Van der Hoorn to score anytime is 11/1* at Bet UK’s online sportsbook.

Millwall are another team that Swansea haven’t played since they were last in the Championship. The last time the 2 met was in 2011. Swansea ran out 2-0 winners at Millwall that day, thanks to goals from Darren Pratley and Stephen Dobbie. The last time that Millwall beat the Swans was in 2008 when the 2 teams were in League 1. Millwall won 2-1 at the Liberty, with recent form in this fixture suggesting that the advantage normally falls to the away team. The sides met regularly between 2006 and 2008, but have only faced each other twice since then.

Swansea won 2-0 the last time they were at the Den. If you fancy a repeat of that scoreline, then Bet UK’s sports betting feature currently has odds of 16/1*.

Where To Watch and Where To Listen

Both teams will be looking to get back to winning ways, but there’s no doubting that Swansea have been the more impressive team so far this season. If Swansea can replicate their performance against Leeds, then we expect them to win again at Millwall.

Our prediction is Millwall 0-1 Swansea, which is available at 33/4* at Bet UK’s online sportsbook.

We are also offering Swansea to Win, Over 2.5 Goals and Over 10.5 Corners at a huge 12/1 on our Swansea City Betting Specials page.

Bet UK are covering all the latest Swansea City news on our online sports betting blog. We will bring you press conference quick reads, match previews and regular man of the match reports.

*Odds are subject to change.